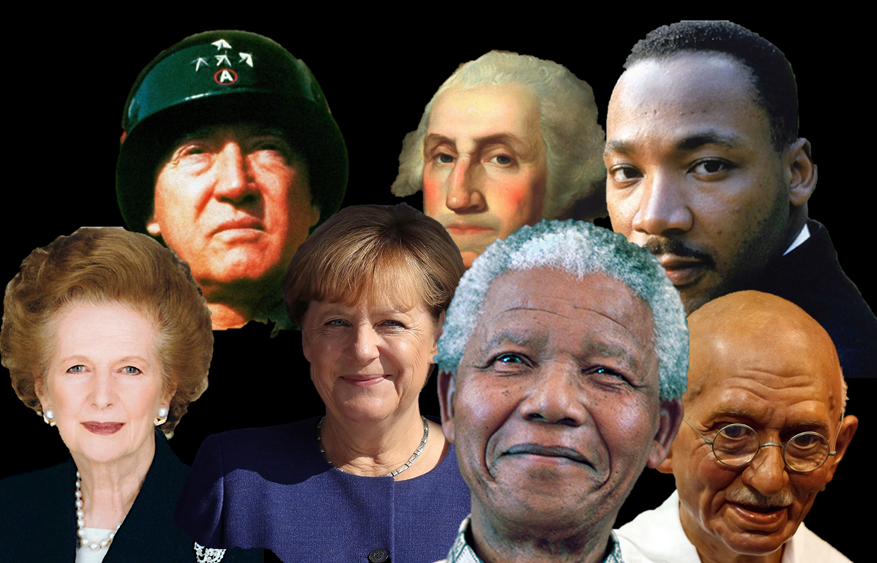 I have some thoughts on leadership traits. In fact, I have more than one thought. I have all kinds of ideas on all kinds of things.

And then I have some thoughts on Leadership Traits worth sharing.

If you list all the great leaders over time, for instance, let’s look at just a few:

You could describe a list of leadership traits that all these people have in common. Each of these individuals has a unique mix of traits. None share the same list. Washington was known for his honesty, Martin Luther King his ability to communicate, and his charisma. Thatcher for her resolve. Gandhi for humility. Lincoln for using compromise to build coalitions, Patton for bold actions, Churchill for oratory.

It is my opinion that there are few mandatory traits for leadership… except maybe courage. You can’t be a leader if you don’t possess the courage to face hard truths… to address the elephant in the room.

My thoughts on the leadership traits that make a great leader can be described by examining the 96 box of Crayola Crayons. Like the big box of crayons, there are a myriad of traits. Yet leaders are more like the 8 Crayon Box. Each person only gets a subset of leadership traits in their Crayon Box. For instance, MLK traits include:

But you probably wouldn’t say he was humble. He may have been decisive, and yet that wouldn’t be his most dominant trait as it would be for someone like General Patton.

No, leadership is a combination of 5 or so dominant traits out of the crayon box of 96.

Some of us may overload our crayon boxes with duplicate colors. For instance, Donald Trump has 1 large Charisma Crayon and 7 orange crayons. It didn’t leave him much room for the thoughtful, empathetic, or brilliant crayons.

As leaders, it’s important for us to recognize what color crayons are our dominant traits and to embrace them… and to always embody them. Our followers are watching, and when we betray a perceived leadership trait, we dilute our ability to lead. For instance, Martin Luther King was warned… he knew his life was in danger. Yet he courageously put himself out front. He risked and sacrificed his life to be true to himself as a leader. MLK personified courage. Leaders must be true to and model the leadership traits that define them every day. This means they must be conscious of the definition of those traits and intentional about modeling them every moment of every day.

What are your leadership thoughts on your crayons? Do you know which of your traits if any inspire followers? If you don’t know… do you think you may unintentionally sabotage your authority? Let’s discuss. If you’re a leader who runs a business and you’re interested in being a better leader? Try a complimentary one-on-one coaching session by pressing the button below and let’s make sure your leadership crayon box is filled with bold, meaningful crayons and not the weak pastels that won’t attract followers. Let’s make sure you’re intentional about modeling your behavior as a leader.