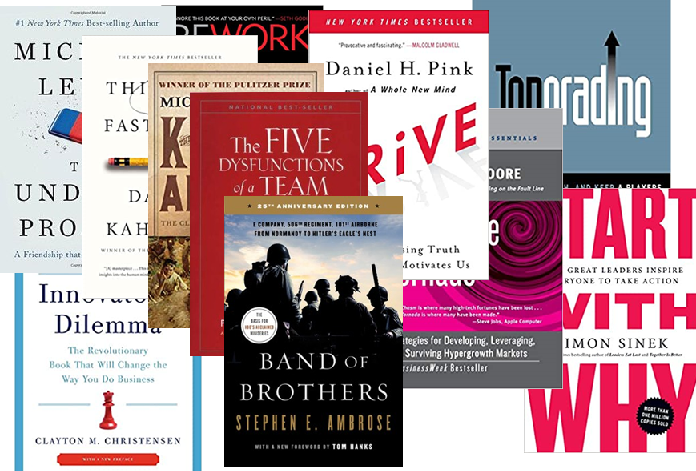 16 Books All Leaders Should Read

By Glen HellmanJanuary 12, 2022No Comments

Killer Angels – One of two novels on the list taken from the West Point reading list, Killer Angels is a study in leadership. Michael Shaara’s historical novel tells the story of three critical days of the Battle of Gettysburg in the American Civil War. The character-driven story is told from the perspective of various protagonists.

Band of Brothers – A story-driven, real-life study in leadership by historian Stephen Ambrose. The book follows Easy Company, 506th Airborne Division, U.S. Army, through tough assignments — responsible for everything from parachuting into France early D-Day morning to the capture of Hitler’s Eagle’s Nest at Berchtesgaden. In Band of Brothers, Ambrose tells of the men in this brave unit who fought, went hungry, froze, and died, a company that took 150 percent casualties and considered the Purple Heart a badge of honor. There is an HBO limited series based on the book and the film, “Saving Private Ryan” is loosely based on Easy Company.

5 Dysfunctions of a Team – By Patrick Lencioni, the book describes the many pitfalls that teams face as they seek to “row together”. This book explores the fundamental causes of organizational politics and team failure. Like most of Lencioni’s books, the bulk of it is written as a business fable.

5 Temptations of a CEO – Another Patrick Lencioni fable, the 5 Temptations can be read in one sitting which is not to diminish the importance of the 5 simple lessons. Simple to implement yet impactful.

Start With Why – Simon Sinek’s book defines the elements of a strong motivational culture.

Blue Ocean Strategy – W. Chan Kim and Renée Mauborgne reveal their framework for designing a product strategy that will differentiate a company’s product and avoid competing in price-sensitive commoditized markets. Using a Blue Ocean framework should empower companies to operate in Blue Oceans as opposed to blood-filled red oceans.

The Discipline of Market Leaders – Michael Treacy and Fred Wiersema outline a strategy to target your customers, narrow your focus and dominate your market. The author’s theory is to focus a companies efforts on being best of breed in one of 3 competitive axes: 1) Innovation, 2) Operational Excellence, or 3) Customer Intimacy.

Inside the Tornado – Geoffrey Moore author and Venture Partner at Mohr Davidow has written six books. More accurately he’s written one book with six different titles. His first book Crossing the Chasm is the seminal work and instruction manual for startups creating new market spaces with disruptive products. His second book covers all the important lessons of Tornado with some refined thinking. The best of the six.

Rework – Rework shows you a better, faster, easier way to succeed in business. Authors, Jason Fried, David Heinemeier Hansson explain, why you don’t need a business plan, investors, and why you should ignore the competition. It’s like leaner than lean and buying this book will add too much overhead to your company so steal it. Now that’s lean(please don’t steal it, I said that in jest).

The Lean Startup – Eric Reis’s tech startup bible. A Lean Startup is an approach for launching businesses and products, that relies on validated learning, scientific experimentation, and iterative product releases to shorten product development cycles, measure progress, and gain valuable customer feedback. Most tech entrepreneurs bring this book with them to their place of worship.

The Innovator’s Dilemma – Author, Clayton Christensen suggests that successful companies can put too much emphasis on customers’ current needs, and fail to adopt new technology or business models that will meet customers’ unstated or future needs. The book outlines why large cash-cow companies like Blockbuster have such a difficult time competing with disruptive entrants like Netflix. The answer to the VC question…. why won’t Google do this?

Top Grading – Brad Smart explains the methodology to building a company of A players.

Influence – Robert Cialdini’s study on the science of influencing people.